Hallmarks on My Georgian (i think) Ring My engagement ring was purchased in Los Angeles at a reputable vintage watch and jewelry store. We paid $900 for it and it has some interesting hallmarks on the inside of the ring. I wanted to find out where this ring was made and then possibly figure out its history.

The ring is 18 carat gold with beautiful scrolls leading up to the "flower" shaped diamonds. There is one larger diamond in the middle with 12 smaller diamonds. They appear to be mine cut or rose cut.

The hallmarks from left to right are: crown, 18, a mark that appears to be 3 small stalk-like objects in a pattern of 2 next to each other and one centered below, a circular curly-que or an elaborate number 6 shape and then next to that is the number 75 but there is a faint number 1 to the left of that.

Any clue as to where this ring was made, what year, etc.?
Thank you,
Susan

What a beautiful ring and congratulations on your engagement!! The stamps on the ring indicate the type of metal used in the ring, and possibly provide info on when the ring was made and/or who made the ring. 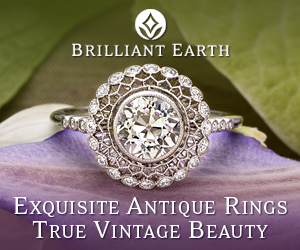 Let's start with the crown and the 18. The crown stamp was used by Great Britain, starting in 1798, to denote 18-carat gold. So, it is safe to say that the ring was crafted after this date. The cluster-style of the ring also suggests that the ring was made after the 1700s because this style of ring was first introduced in the early 19th century.

The 75 stamp at the end also signifies the gold carat of the ring (18 carat gold is 75% pure gold by weight). I'm not sure about the faint "1" next to the 75, unless it is a left over depression from the stamp next to it?

The curly-que too could either be a maker's mark or a letter which indicates when the ring was made. It's difficult to know - without seeing the stamp - which it is. Date letters though have a frame around them in a specific shape (for example a circle or square shape), which if this stamp does not have a shape stamped around the curly-que sign it would probably be a maker's mark then. You can look at some of the date letters used on silver and gold at this site:

So, to sum up - the ring was most likely made somewhere in Great Britain in the 1800s. I would lean more to the Victorian era because diamond cluster rings were really popular then - and diamonds were not widely available during the Georgian era. It is possible too though, as diamonds were not widely available until after 1867 that the ring could be a Late Victorian ring (1890-1901) because diamond cluster rings in particular were popular during this time.

I hope this info helps. If you take the ring to an antique dealer who is familiar with hallmark stamps you may be able to find out more specific information about the 3-sheave and curly-que stamps.